To produce a shoe mould quickly, thereby achieving a fast drawing board to shop turn around.

Download PDF
Due to the rise in costs of producing a pair of shoe sole moulds using the conventional methods of casting or engraving, metalspray moulds have increased in popularity over the past decade.
By using the Metallisation Arcspray Process of Mould Manufacture, it is possible to produce a pair of shoe sole moulds in two or three days as opposed to two or three weeks, and at as little as 50% of the cost where conventional processes are used. Another important advantage is the accurate reproduction of textured surfaces and having the ability to produce a mould directly from the design model. In the shoe industry, being able to respond rapidly to customers sample requirements will inevitably give a distinct advantage over competitors. 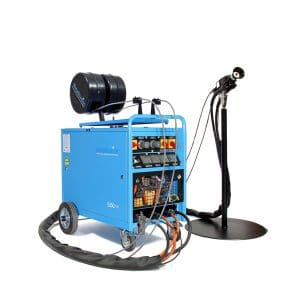 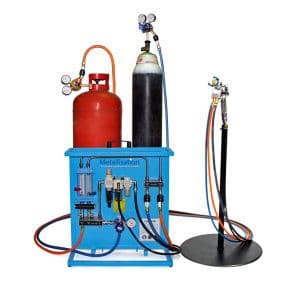 It is the job of the model maker to produce the pattern. A wide range of materials may be used such as wood, plaster, leather, wood covered with wax and cork are the most common ones used. All these materials must be able to withstand the pressure of air from the metal spraying pistol and the rise in temperature during the spraying process (up to 55 lbs per sq. inch and approximately 45-50°C). The pattern is then suitably mounted onto a wooden base which will give the split line of the mould to be produced. Alternatively, a plaster of paris base may be used which enables the pattern to be removed when the reverse side is to be sprayed. The pattern is finally given a fine coating of crystic release agent and allowed to dry completely before the next coat is applied. 2-3 coats are normally necessary. After the application of the release agent, special care must be taken to prevent any contact with the model surface because even a finger print will be re-produced when metal sprayed.

The best results will be achieved by using an Arcspray System with a 1.6mm diameter CG spray nozzle assembly. The best surface finish is obtained using Metallisation 24E moulding alloy for the first 0.40mm to 0.65mm followed by 1.0mm of pure zinc. It is necessary to use the fine spray set up to obtain as dense a spray as possible.

During spraying, the pistol should be held at a minimum spraying distance of 25cm and wherever possible, at 90° to the work surface. Throughout the whole of the spraying process, the pistol should be traversed over the work surface to give the essential uniformity of spray on the pattern. It is advisable to keep a check on the mould temperature which should not exceed 50°C. Excessive heat will cause the spray alloy to lift away from the pattern and cracks would then form on the mould surface when cooled. An ideal method for keeping the mould cool is to have an air jet directly above the mould being sprayed. This will assist with cooling and also reduce the possibility of dust particles being trapped under the surface When a reasonable thickness is obtained – 2.0mm-3.0mm, the mould is then ready for backing.

Backing up off sprayed shell

The three main methods of backing up are:-

This method is most used when manufacturing PVC units. The zinc based alloy will withstand the injection pressures. It is a very heavy material weighing 6.90 grams/cm³. One of the disadvantages of this method is the shrinkage rate of kirksite, approximately 1% and also no adhesion properties. A bond cannot be obtained between the kirksite and the sprayed shell.

The most suitable backing method depends on the material being moulded; soft PVC, hard PVC, polyether or polyester.

After the cavity half of the shoe mould is complete we go onto the lid or weld site of the mould. By removing the mounting block from the mould, the weld side of the model is exposed.

The lid or welt side of the model

A clean, newly formed, sprayed surface must now be coated with crystic release agent. This is essential to enable both halves of the mould to be separated on completion. The spraying is again repeated as on the cavity side, to form the lid of the mould, and backed in the same way. The shoe mould is now ready to be opened and the mould removed, leaving a cavity which is an exact replica of it.

Removal of the model

If the model is made of wood or cork covered with leather, it normally has to be “shocked” or broken out of the mould. When wax is used as a covering, it is possible to remove the wood from the centre then peel the wax from inside the mould, leaving it clean and ready for production, and is an advantage when duplicate moulds are required. The wooden part of the model is complete only the wax must be replaced.

Due to the changes in fashion metal sprayed moulds are becoming more popular. They give the manufacturer the opportunity to produce moulds in a wider range of styles and to have a shoe from the drawing board to the shops in a far shorter time. It is essential to produce accurate samples in the shortest possible time to enable production to progress. Small manufacturers are finding metal sprayed moulds are helping them to compete with larger companies because of low equipment costs and speed of mould delivery.