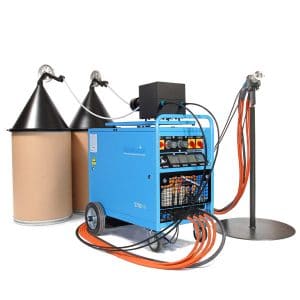 View Product
Metal or thermal spraying is a technology, which protects and greatly extends the life of a wide variety of products in the most hostile environments and in situations where coatings are vital for longevity. Metal spraying is carried out in a wide range of anti-corrosion and engineering markets.

Metallisation has been synonymous with surface coatings since 1922. From its beginnings as a company providing an answer to corrosion problems on structural steelwork, successive generations of highly respected principals have led Metallisation to its current position, where it is respected as an expert in the technology of surface coatings.

Metallisation has many diverse clients around the world from the USA, the Middle East, Far East and Australasia, actively supported by trained distributors. The common denominator for all of Metallisation’s clients is to provide surface coating technology for protection and longevity of equipment, structures, vessels, pipelines and storage tanks.

One such client is Anti Corrosion Protective Systems (APS), based in Dubai, who have been using Metallisation Arcspray equipment for the last ten years across a variety of projects, including the anti corrosion protection of the world famous Burj Al Arab Hotel in Dubai. APS, founded in 1978, offers a wide range of specialist coating services to the construction, oil, gas, power and water industries throughout the Middle East, the Caspian region, India, Pakistan, the Near East, Far East and Pacific Rim regions.

APS has vast experience in metal spraying projects across a diverse range of companies and industries, some of those projects include:

Burj Al Arab Hotel APS chose the Metallisation Arcspray equipment as the preferred system to protect the Burj Al Arab hotel, after being awarded the contract from the Jumeirah Group to spray the vital structural components of the hotel frame to protect against corrosion.

In total, 10,000m2 of steelwork was arc sprayed, over an intermittent six-month period. The items sprayed included the heli-deck framework, roof mounted mast and 6 diagonal support braces, each weighing in excess of 200 tonnes. The surface was first grit blasted to SA 2.5 cleanliness and then sprayed with 150µm of aluminium using Metallisation’s Arcspray 140 and Arcspray 700 systems. The Arcspray 140 system offered excellent flexibility for hard to access areas, due to its long reach and flexible drive system. The Arcspray 700 system was used to spray large, less complicated areas as quickly as possible, due to its high spray rate. An epoxy sealer and three coat paint system was then applied for aesthetic reasons and finished with a topcoat of 50 microns of polyurethane. The aluminium coating should guarantee a 15 to 20 year protection against corrosion in the harsh, coastal environment in which the Burj Al Arab stands.

The sulphur dump drums and pipes, used to store and transfer sulphur in a refinery, were sprayed using the Arcspray 140 and Arcspray 700, for corrosion protection. Again, the surface was blasted to SA 2.5 cleanliness and sprayed with aluminium to a thickness of 350µm. The aluminium was then sealed with a high temperature Silicone Aluminium sealer over a total surface of 1681m². As the coatings were internal and not visible, no painted topcoat was required. The project took over two months to complete.

Various other structures have also been sprayed as part of the project including condensers and other drums, vessels and pipework. Discussions are ongoing between APS and the customer regarding the future projects, which can benefit from metal-sprayed coatings to give long-term corrosion protection.